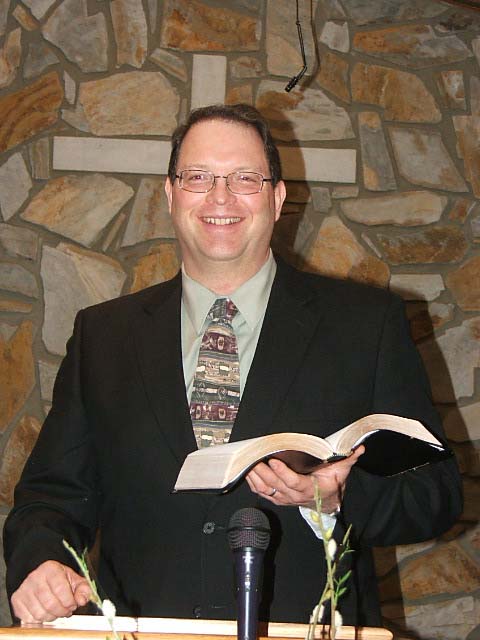 Pastor Brad Calhoun is a native of Avery County. He is the oldest child of Edward and Annie Calhoun of Newland. After graduating from Avery High in 1977, he studied for a year on the pre-med program at Appalachian State University. During that year at AppState, God was dealing with Pastor Brad regarding the ministry. He therefore transferred to the Theology program at Piedmont Bible College of Winston-Salem, NC, in 1978. It was at PBC that he met Sarah Delavan, a dairy farmer's daughter from upstate New York; they married in 1980, then finished their training at PBC and graduated in 1984. During their years at Piedmont, in the summer of 1982, they spent six weeks as missionary apprentices in Quebec, Canada. They returned to school with the certainty of God's call for them to go back to Quebec as missionaries, to plant churches among the French-speaking people of Canada.

The next few years after graduation were spent gathering their support for the mission field. For a couple of years, Pastor Brad and Sarah lived here in Avery County. Their two daughters, Margaret (Meg) and Elizabeth (Beth), were both born in the Crossnore hospital, in 1984 and 1986 respectively. The Calhouns moved to New York State in October of 1986 and then on to Quebec City, Quebec, in January of 1989.

For the better part of the next nineteen years, the Calhoun family lived in Canada as missionaries with Baptist Mid-Missions. First they studied French in Quebec City, and then they worked in church planting and development in two Canadian provinces, Quebec and New Brunswick. They also taught courses at two Bible institutes to help train young men and women for the ministry, and served in a camp ministry for junior-age youngsters during a period of fifteen summers.

From August of 1995 until September 30, 2007, Pastor Brad was the missionary pastor of an independent French-speaking Baptist church in Matane, Quebec. Sarah was privileged to be able to teach the Bible in "Protestant Religious Education" courses in the area's public elementary and middle schools for nine years, as well as homeschooling Meg and Beth. Upon completion of their home studies, their daughters each attended Bob Jones University in Greenville, SC. Meg has now obtained a Bachelor of Arts degree in Bible and violin, and is married to Duncan Johnson. She works on staff at BJU while Duncan completes his Master of Divinity degree. Beth is a junior at BJU studying Elementary Education.

Pastor Brad and Sarah were finishing up their work in Matane, preparing to turn the church over to a Quebec pastor and looking for further ministry opportunities in Canada, when Faith Baptist Church approached them about returning to North Carolina. After several months of prayer and seeking God's leading, they and Faith Baptist Church became convinced of God's directing hand in returning the Calhouns to Avery County.

With "fear and trembling," Pastor Brad began his ministry at Faith Baptist Church on January 1, 2008. He anticipates seeing God work here in Linville just as he saw Him work in Quebec. To God be the glory!

Please feel free to stop by for a visit at one of our services. The family atmosphere, the traditional Christian music and the Bible messages will nourish your soul and encourage you in your spiritual walk. Here at Faith Baptist our goal is to "apply the Bible to daily life."